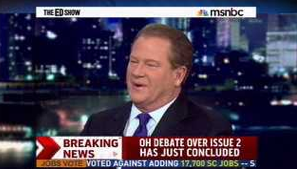 MSNBC’s Ed Schultz will host “The Ed Show” on Monday and Tuesday from Ohio, where voters will head to to the polls this week to decide the fate of Senate Bill 5, a controversial re-write of the state’s union laws.

Schultz will broadcast from the Columbus Professional Firefighter’s Local67 Union Hall. Both Monday and Tuesday’s shows will be open to the public.

The trip will mark the second time Schultz has covered the SB5 legislation from Ohio. In September, he challenged Republican Governor John Kasich, to appear on “The Ed Show.” Kasich, a former Fox News host, declined.