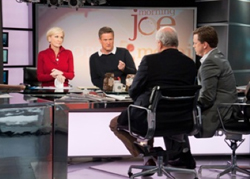 Mediaite’s Colby Hall reports that CBS News is “close” to a deal with “Morning Joe” executive producer Chris Licht, adding that the goal is to woo hosts Mika Brzezinski and Joe Scarborough to the network when their contracts expire “within the year.”

TVNewser has heard the Licht rumblings as well, but the likelihood that Joe and Mika would make the jump to CBS does raise some red flags.

The first is mentioned by Hall, who notes that “Morning Joe” is kind of a wonky program, and may not translate to a broadcast network. “[T]hey would probably have to change the show significantly from its primarily insider political buzz to appeal to a broader audience,” Hall wrote.