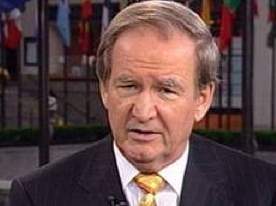 In his new book “Suicide of a Superpower: Will America Survive to 2025?” MSNBC contributor Pat Buchanan argues that “ethnonationalism” is tearing the United States apart and that the “European and Christian core of our country is shrinking.” In his dire introduction, he warns that the “nation is disintegrating, ethnically, culturally, morally, politically.” And he strikes the same themes during his TV and radio appearances promoting the book.

The ColorOfChange.org petition reads, “Buchanan has a long and consistent history of peddling white supremacist ideology as legitimate political commentary, on your network and elsewhere.” Noting that Buchanan has the right to express his views, the petition says “he’s not entitled to a platform that lets him broadcast bigotry and hate to millions. If MSNBC and NBC want to be seen as trusted, mainstream sources of news and commentary, you need to fire Buchanan now.”

Buchanan has not appeared on MSNBC since he began promoting his book on Oct. 22.