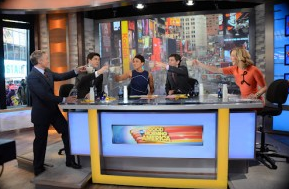 ABC News is launching a live daily web show tied to its “Good Morning America” franchise. The 15-minute program “GMA Live,” will stream on goodmorningamerica.com and ABCNews.com at 9:15 AM every weekday starting on Monday, Dec. 10, and will be available on-demand afterward.

Anchors and contributors will vary day to day, but Josh Elliott, Lara Spencer, Sam Champion and Amy Robach will all take turns hosting.

“This is a chance for our gang to put their feet up and bring everyone backstage right after we get off the air,” said “GMA” senior EP Tom Cibrowski in a statement. “We are going to have a great time pulling back the curtain a bit.”

The content of the after-show isn’t entirely clear, though it sounds like it will expand on stories mentioned in the TV program itself. “Isn’t it too bad there is just two hours of “GMA” in your mornings?” says a voiceover in an ad for the show. The Barnes & Noble Nook has signed on as the launch sponsor of the digital series.