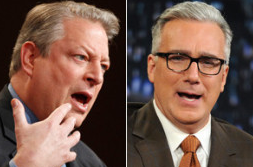 Conflict between Keith Olbermann and his bosses at Current TV reached severe depths in the weeks before the Iowa caucuses, according to a new report in Newsweek.

Reports of tension surfaced at the end of December when Olbermann was noticeably absent from Current TV’s 2012 election coverage. The tension boiled over as Olbermann and network executives called each other out on his refusal to host. The feud was eventually resolved, and Olbermann anchored the network’s coverage of the South Carolina primary.

In a new piece for Newsweek, Rebecca Dana reveals new details about the tension between the two, and the rocky road ahead that Current faces in its quest to gain an increased television foothold.

Al Gore, who jointly owns the network, personally called Olbermann less than 24 hours after he left MSNBC in January to offer him a job. Executives gave the host the title of “chief news officer,” an equity stake in the company and $15 million show budget. However, trouble flared as the year went on.

Dana reports that that Olbermann’s relationship with the network took a bad turn months before the primaries began. She claims that the oft-prickly host was raising concerns about cheap sets, ignored emails, demanded more control over personnel decisions, and complained about his car service.

These conflicts spilled out into the open. One technical glitch, for example, had him broadcasting in the dark and lighting a candle to mock the blackout. Sources later cited his frustration with low technical and production values as central to the tensions in January.

Things got so bad that Gore found himself “begging” Olbermann not to leave Current, Dana writes. Eventually, both sides smoothed things over, and OIbermann is securely ensconced in place.

The back-and-forth with its biggest star comes at a time when Current TV is facing an uphill battle in its strategy for growth. Al Gore and business partner Joel Hyatt, who own the network, have staked their efforts to transform the upstart network into a liberal news outlet on the “Countdown” host. They have also hired hosts Cenk Uygur and Jennifer Granholm to flank Olbermann, and Dana reports that the network wants a more left-wing morning show to rival “Morning Joe.”