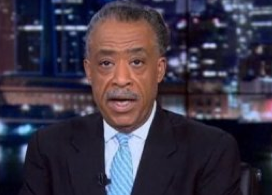 MSNBC hosts Rachel Maddow and Al Sharpton are featured in the April issue of Vanity Fair. Sharpton, interviewed by George Wayne, talks about his weight loss, his famous hair, and his early introduction to speaking in public.

“I knew from the age of four I wanted to preach,” Sharpton said. “I didn’t even consider it strange that grown people were listening to this kid preaching until I was around 13 years old. I have never believed in limitations.”

Maddow is featured in the Proust Questionnaire. She reveals her most overused phrases — “awkward” and “Republican governor Scott Walker” — as well as her idea of perfect happiness, a “loud bar, good band, cold beer, ride home.”