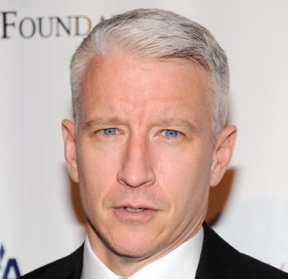 Anderson Cooper has officially come out as a gay man.

The CNN anchor and talk show host discusses his decision in a letter to political blogger and friend Andrew Sullivan, published on Monday.

He writes, “I’ve always believed that who a reporter votes for, what religion they are, who they love, should not be something they have to discuss publicly. As long as a journalist shows fairness and honesty in his or her work, their private life shouldn’t matter.”

While Cooper still believes his private life is just that, he acknowledges that by “remaining silent on certain aspects of my personal life for so long, I have given some the mistaken impression that I am trying to hide something.”

He makes it clear that that is simply not the case.

“The fact is, I’m gay, always have been, always will be, and I couldn’t be any more happy, comfortable with myself, and proud,” says Cooper.

The CNN host emphasizes that his role as a journalist supersedes his public discussion of his sexuality.

He explains, “Since my early days as a reporter, I have worked hard to accurately and fairly portray gay and lesbian people in the media – and to fairly and accurately portray those who for whatever reason disapprove of them.”

Cooper continues, “It is not part of my job to push an agenda, but rather to be relentlessly honest in everything I see, say and do. I’ve never wanted to be any kind of reporter other than a good one, and I do not desire to promote any cause other than the truth.”