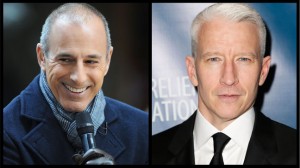 Anderson Cooper is being eyed as a possible replacement for Matt Lauer as “Today Show” host, according to multiple reports.

The CNN anchor, whose own daytime talk show is ending this year, has reportedly been approached by NBC to discuss potentially taking over for Lauer, although the exact timetable and specifics have not been made clear.

It should be emphasized that Cooper has NOT agreed to any “Today Show” deal, nor has Lauer’s exit been confirmed.

After the reports surfaced on Wednesday, an NBC executive released the following statement through a rep: “As we’ve said before, Matt Lauer is the best in the business. We want him in the ‘Today’ show anchor chair for many years to come.”

“We are not considering replacing Matt Lauer,” said the rep.

Lauer is under contract through 2014, although it’s possible he could depart before it expires.

Adding to the intrigue is a Deadline report claiming Lauer was upset about the network’s actions and called Cooper to express his disapproval.

However, that version of events is being called into question by sources at NBC, who say Lauer is on board with the possible Cooper succession plan and plans to meet with his fellow newsman to discuss it, despite the official denial.