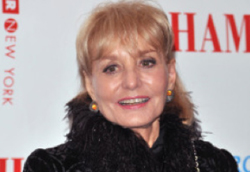 Barbara Walters is returning to “The View” — for one day.

Walters, who has been absent from the show since her heart surgery in May, will be appearing live via Skype on July 12.

Though she’s been seen around town since the surgery, Walters has stayed away from “The View,” instead making the occasional on-air phone call to her fellow co-hosts.

Still, Walters is not returning to the set for good just yet. Her appearance next Monday seems to be a one-time-only thing for now.