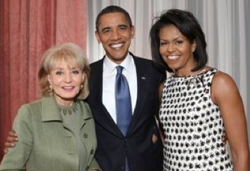 ABC’s Barbara Walters will interview President Barack Obama and first lady Michelle Obama at the White House for a network special to air the day after Thanksgiving.

The veteran newswoman has interviewed every president since Richard Nixon. It will be her second time sitting down with the Obamas, not counting a presidential visit to “The View.”

ABC said Tuesday that the interview will be conducted at the White House on the Tuesday before Thanksgiving and air Friday at 10 p.m. Eastern.

The recent midterm election results will be a big topic, as it was when Steve Kroft of CBS’ “60 Minutes” talked to the president two weeks ago.