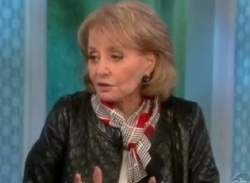 It comes as no surprise that the legendarily competitive Barbara Walters was able to land former President Bill Clinton, David Letterman, Robin Williams and Regis Philbin for her ABC News special this week.

The selling point was what tied all the celebrities – Walters included – together: their open heart surgeries.

As she recovered from her own surgery to repair a faulty heart valve last May, Walters realized that the prevalence of heart disease and the fear many people have of a heart operation made for a good story. “A Matter of Life and Death” airs at 10 p.m. EST on Friday.

“I didn’t want people to feel that this was going to be an hour lecture,” she said. “To have these very famous, and in some cases very funny, people, meant that they would watch.”

Each guest agreed to talk about his experience. Clinton, the former Big Mac president, revealed that he’s now practically a vegan. The usually private Letterman talks candidly about depression and how he sometimes bursts into tears of joy that he’s doing well, given his medical history and the knowledge that his father died of a heart attack at age 57. Letterman is 63.

Williams shows off his scar and so does Walters – discreetly, of course.

When Walters, 81, first learned she might need surgery, she said Clinton was the only person with whom she discussed it, when they ran into each other at a holiday party in 2009. She didn’t even tell her daughter until shortly before disclosing it on “The View” in May.