Barbara Walters to be Replaced by Maria Shriver on The View? 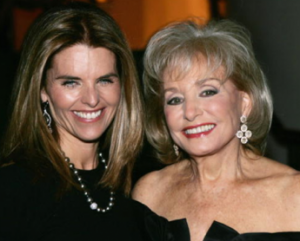 Barbara Walters is “livid” that her “The View” bosses at ABC are “already eyeing her replacement — California’s former first lady Maria Shriver!” claims the National Enquirer.

The tabloid’s source says, “Barbara may be sick and frail, but she’s feisty as ever and determined to come back to work” following her recent concussion and bout with chicken pox.

“She loves Maria and respects her talents, but at the end of the day, she’s as competitive as ever and says she has no plans to give up her day job,” adds the Enquirer insider.

According to the magazine, Walters has gone “nuts” while fending off this alleged forced retirement.

“She feels like she still has a lot of pep in her step, and hearing that Maria is eagerly waiting in the wings has her fired up even more to come back with a vengeance,” explains the Enquirer source.

Um, except Shriver is NOT being lined up to replace Walters, and the longtime host is NOT being pushed out of her job.

This is the tabloid’s attempt to set up some kind of rivalry or fight — and it is simply based on nothing.

Walters is due to return to the show next week, and a rep tells Gossip Cop there’s “no truth” to the Enquirer report.

Barbara Walters to be Replaced by Maria Shriver on The View?