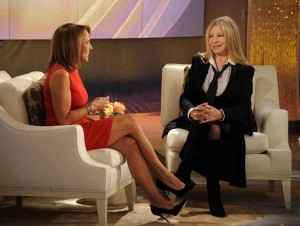 Singer Barbra Streisand rarely does interviews but today, she appears on Katie Couric where she speaks about who she would like to sing a duet with, her duet with her son Jason, her relationship with James Brolin and much more!

Barbra: Oh gosh, there’s so many good guys. First of all, Babyface has a great voice. He’s wonderful. I’m doing this with him producing and Walter Afanasieff, Walter A. Well, there’s so many people. Bocelli.

KC: That would be killer.

BC: We’ve been talking about singing together for a long time, but I send him songs, he sends me songs. The twain hasn’t met yet, you know? I like Keith Urban. I like Usher. John Legend. There’s some really good guys around.

KC: Yeah, that would be exciting.

STREISAND ON GLEE’S LEA MICHELE:
KC: I know that you’ve inspired the next generation of performers so much. Lea Michele, who’s on Glee, I think you’re clearly her role model. I’m speaking for her but I think it’s pretty obvious. But she’s been encouraged to get her nose done, and she’s been very strong about it and said she’s not going to do it, that Barbra Streisand didn’t do hers.
BS: That’s real? That’s not just in the show?
KC: No, no, I think that’s real. That’s real.
BS: Good for her.
KC: That’s what she really believes.
BS: You never could tell. It might change the sound of your voice. The guy might botch it up and make it worse than it was. You just don’t know.

BARBRA ON HER DUET WITH HER SON JASON:
BS: Actually, my very, very exciting duet partner is my son.
KC: That’s so nice. Jason, right? Does he do a lot of singing?
BS: You know I used to sing with him when he was a baby. When I came home from work, we would sing together. And then when he was 15, I heard this gorgeous hum from behind his door. And I went, “Jason, is that you?” [Son’s Response] “Mom go away.” [Barbra] “Open the door, Jason.” [Son’s Response] “Mom, no it’s OK.” But I heard him hum, right? And a few years ago he said, “You know I’ve started to sing and work on some music,” and I said, “Really?” And this is a tough spot to enter that profession for him, I suppose. And I tell you, when I heard the things he’s recorded, the musicianship, the sound of his voice, it’s like he has a little chamber music orchestra right in his vocal chords. I don’t know what it is. His sweetness, his inventiveness musically. I said, “Jason, I have to sing with you. You have to be on my duets album.” Not only that, “You have to come,” – He’s never performed live.
KC: And he’s going to performing with you in Brooklyn?
BS: [Nods yes]

STREISAND ON HER SIXTEEN YEAR RELATIONSHIP WITH JAMES BROLIN:
KC: Your husband, James Brolin
BS: Yeah…
KC: I know this sounds like it’s going to be something inappropriate, but it’s not at all. I was just going to say, he is just so incredibly handsome. I mean, don’t you agree? Seriously?
BS: It is so interesting to see someone that well delineated, you know, just from a structural point of view. I love architecture. How do some people just get everything perfect, like the jaw line, the teeth, the eyes, the depth, the forehead? So he fascinates me.
KC: And you guys have been married for how long now?
BS: We’re together sixteen years. Can you believe it?

Katie Couric: “I Wrestled With Bulimia”

President Obama and Michelle Obama on ‘The View’