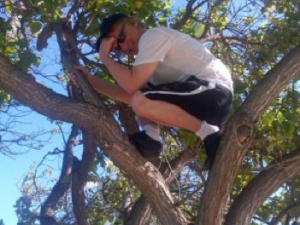 After successfully baiting conservatives with his profane Christmas Eve tweet, comedian and Real Time host Bill Maher continued his Twitter mockery of Denver Broncos quarterback Tim Tebow, including sending Twitpics of himself “Tebowing” in front of a Kim Jong-Il lookalike, and striking the iconic pose in a tree, or “Treebowing.”