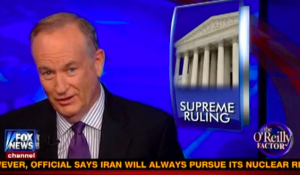 During a March 26 interview with American Constitution Society President Caroline Fredrickson, O’Reilly ended the interview by promising to “apologize for being an idiot” if the court upheld the law.

“I’m not really sorry, but I am a man of my word, so I apologize for not factoring in the John Roberts situation,” O’Reilly said on Monday.

“Truthfully, I never in a million years would thought the chief justice would go beyond the scope of the commerce clause to date and into taxation. I may be an idiot for not considering that.”