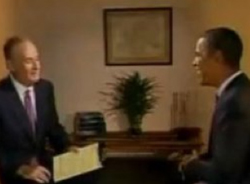 Bill O’Reilly made a bold prediction about his much-hyped pre-Super Bowl interview with President Obama: it will be the most-watched interview ever. As in, in history.

O’Reilly made the prediction when he called into Fox News’ “Happening Now” on Friday morning.

The interview, he said, “will be the most watched interview in history. More people will see this interview than any other interview that’s ever been done in the history of mankind.”

As TVNewser, which caught the prediction first, noted, the current interview record is held by Barbara Walters, whose chat with Monica Lewinsky in 1999 was viewed by a whopping 70 million people.