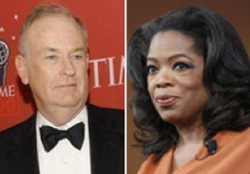 Bill O’Reilly said that the timing of Oprah’s big announcement about her newly-discovered sister was “interesting.”

In an interview with “The Insider,” O’Reilly said there was something a little odd about the timing of the revelation that Oprah had a half-sister, Patricia, who she never knew existed. The show aired in late January.

“That was timed pretty interesting,” O’Reilly said. “This is show biz. If you find a half brother or sister, you time it for ratings.”

He did call Oprah “a big talent,” but said that she was “for women. I’m really not qualified to critique her.”