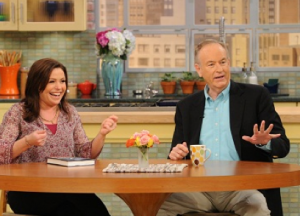 During the interview, which was taped earlier this month, O’Reilly weighed in on the current state of the Republican party, as well as whether he would ever run for President (no) or participate on “Dancing with the Stars” (maybe).

“Somebody actually asked me that,” he said. “And I said to them, ‘Only if you have a Twist show.’ The Twist, remember the Twist? I can do the Twist.”