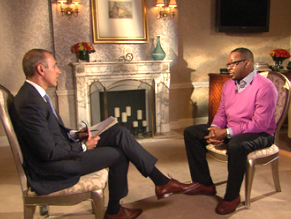 Bobby Brown has given his first interview since Whitney Houston’s death, sitting down with Matt Lauer of the “Today Show” for a conversation set to air on Wednesday and Thursday.

Lauer asks Houston’s ex about the fact that everyone says the late singer’s life took a dramatic turn for the worse after meeting him.

“It makes me feel terrible,” says Brown, but he rejects that interpretation.

He explains, “If anyone ever knew us, if anybody ever spent time around us instead of time looking through the bubble, they would know how we felt about each other. They would know how happy we were together.”

When Lauer presses Brown on whether it’s fair he got the “blame” for Houston’s drug use and eventual death, Brown takes a stand, insisting that he had not been the one to introduce Houston to narcotics.

Brown says she was using “way, way before. It’s just unexplainable how one could, you know, [say that I] got her addicted to drugs. I’m not the reason she’s gone.”

He tells Lauer that he saw Houston a week before her death, at which point she had a “glow about her” and “looked really well.”

Brown recalls Houston joking around with him and their daughter Bobbi Kristina that night, and that Houston “looked like she was in a good place.”

He says he was “hurt” when he found out cocaine had contributed to her death, saying, “I didn’t know she was struggling with it still.”

“One hit, you know… it could definitely take your life away from you,” laments Brown. “And, unfortunately, that was it.”