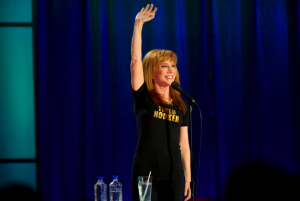 Comedian Kathy Griffin, a staple personality on Bravo with her outlandish stand-up specials and reality series “My Life on the D-List,” will be getting her own prime-time pop culture talk show on the network in the spring, the network announced Saturday.

Titled “Kathy,” the show will feature Griffin’s rants on tabloid fodder, stand-up routines, celebrity interviews and taped segments. The show continues Bravo’s experiment with the talk-show format. Its first foray, “Watch What Happens Live,” has been successful with Andy Cohen as host; it kicks off its sixth season Sunday, which will see the show expand to five nights a week.

In addition to the talk show, Griffin will also have two stand-up comedy specials air on the network this year — bringing her total 15 since 2005.