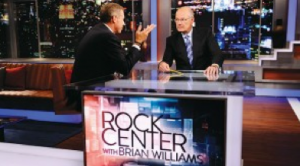 I have heard people in Midwestern V.F.W.’s say nice things about him, but he also received favorable mention at a breakfast of digital media savants I recently attended. In a niched-up world, Mr. Williams is someone we all seem to hold in common, not because he is Uncle Walt, but because he reflects an appealing mash-up of earnestness and knowingness.

What won’t we see on “Rock Center?” Williams tells Carr: “I will be doing some stories and interviews of my own, but you don’t want me selecting the pieces that will run. They would all be about presidential history, the Supreme Court, the military and aviation. No one would watch that show.”