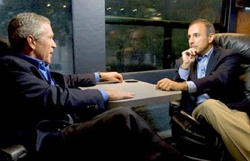 Conducting George W. Bush’s first interview of his publicity tour (which will air Monday), NBC News’ Matt Lauer pressed Bush on his decision to go to war despite “questions” from a number of “dissenters” like Gen. Colin Powell and his father’s former National Security Advisor Brent Scowcroft. Bush responded that “of course there were” dissenters, like himself.

However, this contradicts a CNN report of 2003:

“F___ Saddam. we’re taking him out.” Those were the words of President George W. Bush, who had poked his head into the office of National Security Adviser Condoleezza Rice.

It was March 2002, and Rice was meeting with three U.S. Senators, discussing how to deal with Iraq through the United Nations, or perhaps in a coalition with America’s Middle East allies. Bush wasn’t interested. He waved his hand dismissively, recalls a participant, and neatly summed up his Iraq policy in that short phrase.

The Senators laughed uncomfortably; Rice flashed a knowing smile. The President left the room. A year later, Bush’s outburst has been translated into action, as cruise missiles and smart bombs slam into Baghdad.