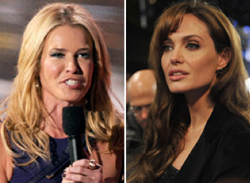 Chelsea Handler went off on Angelina Jolie during a standup performance in New Jersey over the weekend (via Hollywoodlife.com), calling the actress a f**king homewrecker and worse.

Chelsea is good friends with Jennifer Aniston. The two of them of have talked about going on vodka-fueled manhunts together and were recently snapped together in Cabo over Thanksgiving.