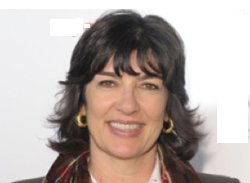 Christiane Amanpour has been named the anchor of ABC’s Sunday morning public affairs program, “This Week.”

“I am delighted to announce that Christiane Amanpour will join ABC News as the new anchor of ‘This Week,'” ABC News president David Westin said in an e-mail to staff. “A highly respected journalist recognized around the world for her reporting, she brings to her new position a wealth of experience and knowledge, as well as a deep commitment to bringing news of the world to the American people. She will also appear on all other ABC News programs and platforms to provide international analysis of the important issues of the day. And, she will be anchoring primetime documentaries on international subjects.”

“I’m thrilled to be joining the incredible team at ABC News,” Amanpour said. “Being asked to anchor ‘This Week’ and the superb tradition started by David Brinkley, is a tremendous and rare honor and I look forward to discussing the great domestic and international issues of the day. I leave CNN with the utmost respect, love and admiration for the company and everyone who works here. This has been my family and shared endeavor for the past 27 years and I am forever grateful and proud of all that we have accomplished.”