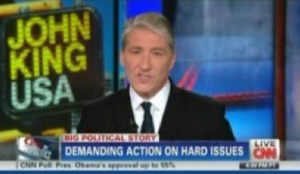 CNN is canceling its 6 PM program “John King USA,” and replacing it with an extra hour of “The Situation Room.” John King will become CNN’s lead national campaign correspondent for the remainder of the election cycle, though that is clearly not as plum a gig as having an hour-long nightly program.

In a memo to CNN staff obtained by TVNewser, CNN/U.S. chief Ken Jautz explained the move:

“John will be providing reports for SitRoom, AC360 and other programs and CNN platforms. This is John’s seventh presidential campaign, fourth with CNN, and making him available across our programming lineup allows us to better tap his skills and experience, especially on the ground reporting in major battleground states and among critical voting blocs.”

CNN also made some other changes in its Washington bureau, naming Joe Johns crime and justice correspondent, and Suzanne Kelly intelligence correspondent.

“JK USA” launched in March 2010, leading up to the midterm elections. Originally at 7 PM, it moved to 6 PM when Erin Burnett joined the network. The program–which focused heavily on politics–failed to catch on with viewers, although it saw a slight uptick during the heat of the current Presidential campaign.