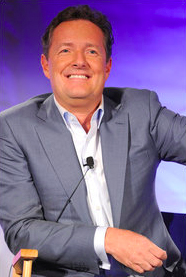 CNN said that Piers Morgan would take over for Larry King next January, putting an end to speculation about one of the most prized time slots in television.

Mr. Morgan, the British-born journalist and talent show judge, will host an interview show weekdays at 9 p.m., the network said. A name for the show was not announced.

In an interview Wednesday morning, Mr. Morgan called Mr. King’s job — the one he is taking — “the greatest interview job in the world.”

It is an extraordinary coup for Mr. Morgan, whom most American viewers know only as a judge on NBC’s “America’s Got Talent.” He will remain on that show, and he will also retain a role on ITV, the British network, where he hosts an interview series called “Life Stories.” His guests there have included Gordon Brown, Simon Cowell, Sharon Osbourne, Richard Branson and Geri Halliwell.

The hiring of Mr. Morgan had been expected for the last two months. In an internal memorandum Wednesday, the CNN/U.S. president Jonathan Klein wrote, “We are delighted that he will now bring his dynamic, probing interview style to American television and to CNN viewers around the globe.”

Mr. Klein also said that Mr. King’s last day would be Dec. 16. Amid a ratings depression, Mr. King announced in June that he was ending his 25-year-old program, “Larry King Live.” He will continue to host occasional specials for the channel.

In hiring Mr. Morgan, the relatively low-rated CNN is making a statement that it still thinks there is room in prime time for long-form interviews with public servants and starlets, a stark contrast to the partisan pundits on its higher-rated rivals, Fox News and MSNBC.