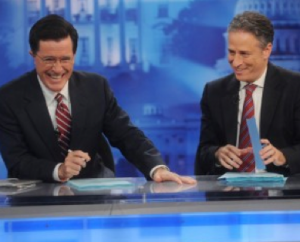 “The Daily Show” remains one of late-night TVs most successful programs, delivering more viewers in the adults 18-49 demographic (1.4 million on average) than any other late night show. Entertainment shows typically sell the 18-49 demographic, as opposed to news programs, which usually target the slightly older 25-54 demo.

Colbert has also seen success following Stewart at 11:30. As we noted earlier, he is also scrutinized by those in the academic community.

Both programs are also two of the preeminent media criticism shows on TV, routinely taking news outlets and hosts to task for what they say and do. Terms of the new agreement were not immediately available.