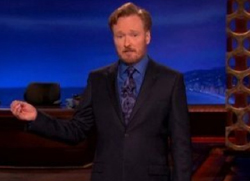 Conan O’Brien said that he dared NBC to shut down his Twitter account after hearing that executives were unhappy with its popularity.

In an interview with Fortune magazine, O’Brien said that he initially “didn’t understand why anyone would do Twitter.” However, when he left NBC, his team asked executives there if the deal he had signed with them–which prohibited him from appearing on television for months and put many other kinds of restrictions on him–also blocked him from tweeting.

When O’Brien launched his Twitter account in February of 2010, its popularity exploded. NBC executives, perhaps aware of their mistake, began sending signals about their displeasure. O’Brien’s response?