Conan Takes a Swipe at NBC 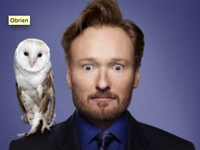 TBS held its upfront presentation, unveiling new programs for cable leaders TBS and TNT. TBS late night host Conan O’Brien was there, and he took the opportunity to tweak his former employer, NBC and its hit morning new show, “Today.”

“Matt Lauer says ‘no, I’m staying. I have a long term deal with NBC.’ All I have to say to that is welcome to TBS.”

O’Brien of course had a contract to host “The Tonight Show,” a deal which went sour when NBC tried to move Jay Leno back to the 11:35 PM slot.

Conan Takes a Swipe at NBC

Shaq Hoists Kevin Hart in the Air on ‘The Tonight Show’