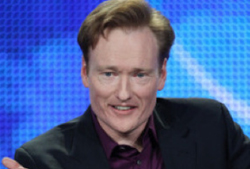 Conan O’Brien will host his new TBS talk show from a California studio that most recently housed “America’s Best Dance Crew.” But it does have a rich movie history.

His show begins in November, and will be recorded on the Warner Brothers lot in Burbank. That’s close to where O’Brien did the “Tonight” show at NBC, a job he held for a little more than six months.

Warners’ Stage 15 was where “All The Presidents Men,” “Batman Returns,” “Ghostbusters,” “The Perfect Storm,” “The Music Man,” “Gremlins,” “Blazing Saddles” and many other films were made.

O’Brien quipped: “I can’t wait to interview the cast of `Jersey Shore’ on the same lot where they filmed `Casablanca.'”

Leno Jokes About Miss USA Being an Arab