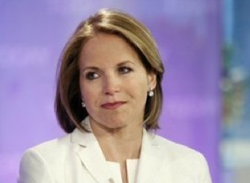 Katie Couric is seriously considering launching a syndicated talk show after her contract with CBS News ends, according to The Hollywood Reporter.

The magazine reports that Couric has been meeting with her former boss, former NBC executive Jeff Zucker, NBC Universal, Time Warner and CBS about the potential show. One source told THR that there is a “strong likelihood” that Couric will go down the syndication route. If she did, the show would start in the fall of 2012–meaning she could not cover the presidential elections for CBS.

A talk show has long been reported as one of Couric’s main options if she does not want to continue as anchor of the “CBS Evening News.” In December, Broadcasting and Cable reported that multiple syndication companies were wooing Couric for a show.

It also seems likely that she could command a higher salary on the syndicated market than if she stayed with CBS. In February, it was reported the CBS chief Leslie Moonves had told Couric he wanted her to stay on, but at a reduced price and only through the 2012 elections. Couric’s team is believed to be resigned to the fact that her current $15 million annual salary is soon coming to an end.

Joe Scarborough: GOP Asked Me To Run For Senate