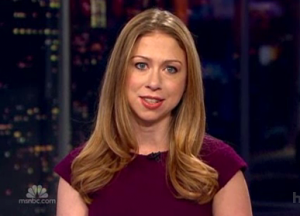 Chelsea Clinton made her first appearance on NBC’s “Rock Center With Brian Williams”–and ostensibly her debut as a journalist–on Monday, delivering a short video report on poverty in her home state of Arkansas. And television critics, while polite, were unimpressed.

Clinton “seems like a very nice young woman” who is “obviously very bright,” Newsday’s Verne Gay wrote. “Otherwise, there was nothing else that necessarily dismissed charges that she got this job because of that name. Her voice–the first time most of us have even heard it–was pleasing and plummy, but monochromatic; in the obligatory crosstalk with Williams following her report, she exhibited the spontaneity of any TV rookie.”

“What was surprising to see on Monday night’s show,” Steuver added, “is how someone can be on TV in such a prominent way and, in her big moment, display so very little charisma–none at all. Either we’re spoiled by TV’s unlimited population of giant personalities or this woman is one of the most boring people of her era.”

“Chelsea doesn’t ‘pop’ off the screen, to use an industry term,” the Daily Beast’s Howard Kurtz wrote. “Her demeanor is reserved, she doesn’t project her voice like a broadcaster. Not that most viewers probably cared. Her best moments were in the subsequent conversation with Williams. Though slightly nervous, she seemed sincere, and her careful cadence, empathetic gaze, and beaming smile were instantly reminiscent of Hillary.”

Will Chelsea Handler Be Guest-Hosting on CNN?