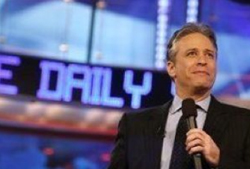 “The Daily Show” says its executive producer is leaving.

Josh Lieb had held the post for four years, and the show announced Tuesday he’s leaving to write a sitcom for Warner Bros. and NBC. He last year released the book “I Am a Genius of Unspeakable Evil and I Want to Be Your Class President.”

Three longtime staffers have been promoted to co-executive producer: Steve Bodow, Jennifer Flanz and Jim Margolis. They join Kahane Cooperman in the position.