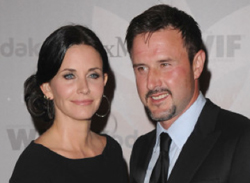 David Arquette called in to the ‘Howard Stern Show’ and told all about the death of their sex life and his post-separation tryst with waitress/actress Jasmine Waltz.

David said that Courteney initiated the separation just after their 11th wedding anniversary in June, telling him “I don’t want to be your mother anymore.” They hadn’t had sex for a month at that point, and haven’t in the four months since–but Courteney gave David the go-ahead to sleep with others.

When asked whether he has a girlfriend he’s moving in with, David said absolutely not, but he did admit to sex with “the girl in the paper”–Jasmine Waltz.

“I don’t have a girlfriend, I had sex with a girl once… maybe twice,” he said.