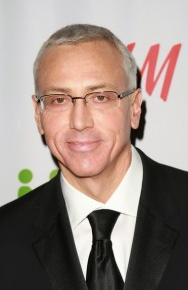 The HLN host revealed the news in a personal essay on his website on Tuesday.

“Why am I telling you this? I want you to hear it from me. Not from the Internet. Not from a gossip column. Not from someone who doesn’t know me,” he writes.

Dr. Drew continues, “And I want to make you aware. Men, you are likely to get prostate cancer. The odds are you will if you live long enough. When you do, don’t freak out. You don’t need to take action today. In many cases, time is on your side.”

So what specifically happened in his case?

The doctor and TV personality says his wife Susan begged him to get a check-up in 2011, and that tests indicated that he could have the disease.

A subsequent biopsy confirmed that he had a tumor, the situation was monitored for more than a year, and that additional biopsies “showed that the mass on my prostate had spread. There was too much volume. The tumor had become unpredictable. Something wasn’t right, and my doctor knew it.”

He explains, “Treating low-grade prostate tumors is an inexact science. There’s what the clinical guidelines recommend. Then there’s what the doctor thinks is best. Sometimes, these two forces are at odds.”

“Once again, my physician listened to what his gut told him,” writes Dr. Drew. “Had he followed the textbook, my outcome might have been worse.”

This July, he had surgery — a radical robotic prostatectomy.

His tumor had been on the verge of spreading had it not been removed.

He’ll speak at length about his experience on Tuesday’s “Dr. Drew on Call.”