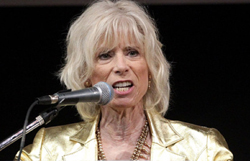 Sirius XM Radio said it has a multiyear deal with Schlessinger to bring her “Dr. Laura” advice program to satellite radio in January. Specific terms were not revealed.

Schlessinger had said in August that she was quitting her syndicated radio program, a week after she apologized for using the N-word on the air 11 times while talking to a black woman, and activists demanded her ouster.

She ends her traditional radio program on Friday, Dec. 31. The following Monday, her “Dr. Laura” show will begin live at 2 p.m. on Sirius XM. It will air for three hours a day on Monday through Friday.

“The first and most important thing that appealed to me was the freedom to speak my mind without advertisers and affiliates being attacked by activist groups that just love to censor anything they don’t agree with,” she said. “That just about made my heart and head explode.”

The liberal watchdog Media Matters for America was a persistent critic. Its leadership didn’t accept her apology and sought to encourage advertisers to drop her show. She was reading the Media Matters website when she decided, “that’s it, I’m done with this,” Schlessinger said.

In the radio incident that prompted her to quit, Schlessinger said to the woman involved, who was married to a white man, that “if you’re that hypersensitive about color and don’t have a sense of humor, don’t marry out of your race.”

Schlessinger said she’ll have some new segments on her show, including interviews with people about situations “that are relevant to the morals, values, principles and ethics that I nag about everyday.”

She said she’s sure she’ll say things that will offend someone.

Schlessinger will be the biggest radio star to jump from traditional to satellite radio since Howard Stern, who had also tired of controversies over things he said and found the opportunity for a big payday.

She’s likely to sacrifice some viewers. It’s estimated her show is currently heard by about 8 million people a day. Sirius XM has 20 million subscribers, but it’s not certain how many of them will be interested in Schlessinger. The service does not release figures estimating listeners for their shows.

Her show will also be available online and through apps on many smart phones, Sirius said; shows will be repeated on radio over the weekend.