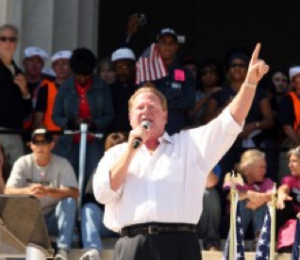 MSNBC host Ed Schultz has been booked as a speaker at the Wisconsin Democratic Convention, according to the AP. “DNC Chairwoman Debbie Wasserman Schultz has been confirmed as one of the speakers. The Florida congresswoman will be joined by Ed Schultz, a nationally syndicated radio and talk-show host,” the newswire writes.

Wisconsin has been in the news as its Republican governor, Scott Walker, is facing a recall election next week. Schultz has made the Wisconsin recall election a big topic on his MSNBC program. His appearance at the state Democratic convention will come a few days after the recall election takes place.

Cable news hosts routinely have public speaking engagements, although engagements closely associated with political parties or politicians are often considered uncouth, even for opinion hosts. MSNBC suspended Keith Olbermann and Joe Scarborough in late 2010 for donating money to a handful of congressional hopefuls.

Kid Turns Down Trip to Disney on ‘Good Morning America’