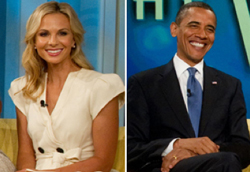 Elisabeth Hasselbeck has some surprising opinions.

In a two-part interview with Fancast, the conservative co-host of “The View” came out in support of gay marriage and described President Obama as “an incredibly cool guy.”

“I am not ultra-ultra-conservative on every issue. I actually support gay marriage,” she told Fancast in part one. “I think the gay marriage thing would definitely surprise people. I mean, for some people, it will surprise them to the point that they won’t want to hear it. ‘No, that can’t be, I really want to have this sort of idea of her in my head,’ so I sort of rain on their parade there. I am a person that does believe that life begins at conception, but I also don’t believe that the government should tell women what to do with their bodies. So I’m torn there in terms of supporting laws [for or against abortion]. I always say I would rather change a heart than a law. I think it has to start there. Always trying to mandate, mandate, mandate this or that is not the way that I believe this country should run.”

Hasselbeck said it would be more appropriate to describe her as a “Federalist” than a “conservative.”

In part two of the interview, Hasselbeck told Fancast that she enjoyed hanging out with Obama backstage, even if she grilled him on-set.

“I think I’m still decompressing from the [experience],” she said. “I was really thankful to have the ability to sit there with our president, to be able to ask him face-to-face a question that I thought so many people have on their minds and [in their] hearts…. The president is an incredibly cool guy. We were able to go backstage with him [after the show] in our Green Room and talk about how everything seemed pretty orderly with him there and how comfortable everyone was. And there was definitely a moment – I mean, he and I looked at each other, and I remember him answering my question and I could see the intensity in his eyes. He wasn’t just answering me, he was sending through me a message to the American people that felt special.”

Barbara Walters to Develop Spinoff of “The View” for Men

'The View' turns 25. Here are 25 times the show gave us something to talk about