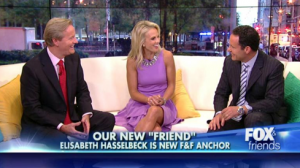 Hasselbeck got a welcome from Regis Philbin, a cake from Carlo’s, she did Zumba with Sean Hannity and got a visit from, naturally, Donald Trump. The show also got a new set. (See the construction video after the jump).

Hasselbeck replaces Gretchen Carlson on the couch. Carlson had been F&F co-host since 2006. She’s now going to anchor part of FNC’s dayside lineup.