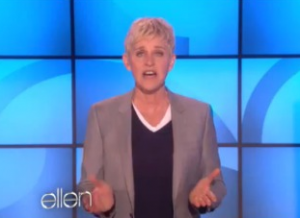 Talk show host Ellen DeGeneres took a little time to address a media watchdog group called “One Million Moms” that has called for JCPenney to pull DeGeneres as its spokesperson because she is gay.

“Normally I try not to pay attention to my haters,” DeGeneres told viewers. “But this time I’d like to talk about it because my haters are my motivators.”

This organization thinks I shouldn’t be a spokesperson because I’m gay. So, uh, for those of you who are just tuning in for the first time: It’s true; I’m gay. I hope you’re sitting down. I hate to break it to you this way. But anyway…

So, they wanted to get me fired, and I am proud and happy to say that JCPenney stuck by their decision to make me their spokesperson.

“I mean, if they have a problem with spokespeople,” DeGeneres continued, “what about the Pillsbury Doughboy? I mean, he runs around without any pants on and basically begging people to poke his belly. What kind of message is that?”

“First of all,” Degeneres responded, “being gay — or pro-gay — is not a bandwagon. You don’t get a free ride anywhere. There’s no music, and occasionally we’ll sing ‘We Are Family,’ but that’s about it.”