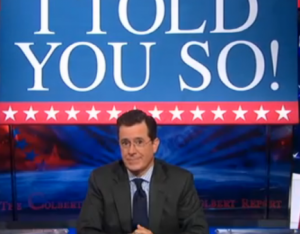 Comedy Central viewers accustomed to watching hosts Jon Stewart and Stephen Colbert back-to-back were surprised last night to find that while The Daily Show was new, The Colbert Report was in re-runs — and after a day of speculation, small tidbits of information are beginning to leak out.

Rumors were fueled early in the day when Comedy Central said that filming had been suspended for the rest of the week, then refused to specify why.

Now sources close to Colbert have told The Wall Street Journal that a family emergency demanded his attention, but did not specify the nature of that emergency.

Other sources close to the show told The Associated Press that The Colbert Report would return to new episodes soon, but did not say when.

Joe Scarborough to Blog for Politico