Film Based on Bill O’Reilly’s ‘Killing Lincoln’ Gets Panned 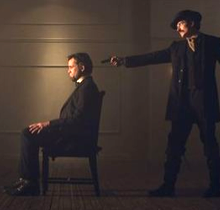 “Killing Lincoln,” a 90-minute TV adaptation of Bill O’Reilly‘s best-selling book debuts on National Geographic Channel tonight. It stars Billy Campbell as Abraham Lincoln, Jesse Johnson as John Wilkes Booth and narrated by Tom Hanks. Before you decide to tune in, here are some reviews. As always, they’re mixed:

The New York Times’ Neil Genzlinger likes the historical detail, “the kind of tidbits that (along with Mr. Hanks’s assured narration) can hold your attention, even though the tale is familiar.”

Hank Stuever of The Washington Post calls it “ambitious but strange.”

Only when it has 20 minutes left to live does “Killing Lincoln” knock it off with the hokey structure and melodrama and let the story itself take charge. Its re-creation of the night of April 14 (and the following mournful morning) finally begins to feel like something we recognize: a thriller.

Slate calls it “deadly dull” and thinks the title is all wrong: “A more accurate title would be Spending Too Much Time With John Wilkes Booth.”

Finally, the AARP blog likes it, “This adaptation may not captivate those familiar with its story, but it fits neatly into the Lincoln canon, and makes for worthwhile viewing on President’s Day eve.”

Film Based on Bill O’Reilly’s ‘Killing Lincoln’ Gets Panned