Quite an eclectic mix of guests on “The View” this morning, summed up best by one of them … “CBS This Morning” co-anchor Gayle King: “You guys, you should see back there. It says Gayle King, Lyle Lovett and Israeli president Shimon Peres. I was with him backstage and I just think, wow, this is such a cool lineup.” Also, Kathy Ireland was in for Sherri Shepherd who is somewhere practicing her Cha Cha. 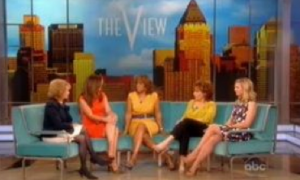 As for her new job at CBS, King says other than the hours, “I ain’t got no complaints. Do I like getting up early? No. But I love what I’m doing.”

Walters added, “Your partner, Charlie Rose tells me that he gets four hours of sleep a night. He goes to dinner parties …”

King also says Oprah Winfrey told her, “This job is a dream job for you.”