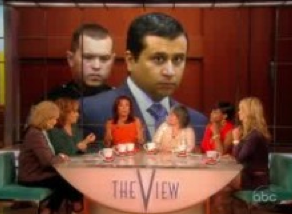 A bizarre exchange occurred on ABC’s “The View” not long ago, as George Zimmerman apparently called into the program to try and talk to Barbara Walters. Walters had her interview with Zimmerman canceled yesterday after he requested a month-long hotel stay.

Walters began the show recounting the exchange with Zimmerman, saying that Zimmerman’s lawyers really wanted him to do the interview, but that the request sounded desperate, and that ABC’s policies forbid it.

Around 11:30 AM she announced that apparently Zimmerman was going to call into “The View.” Towards the end of the show, Walters told viewers that indeed, Zimmerman and his lawyer had called in, but said:

“Mr. Zimmerman, if you could not do the interview yesterday, I don’t think we should do a quick one today. In the future if you feel differently, we will consider it.”