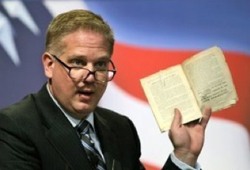 In an ominous and fear-mongering trailer for the event, Ronald Reagan explains that “our country is in danger,” while text calls on the people of Illinois, Indiana, Iowa, Michigan, Minnesota and Wisconsin to save our freedom.

Then, there is audio from a 1962 Reagan speech:

“You will awake to find, that we have socialism. If you don’t do this, and if I don’t do it, one of these days you and I are going to spend our sunset years telling our children, and telling our children’s children what it once was like in America, when men were free.”

The event is geared toward Republicans, Tea Partiers, Independents and basically any other conservative political group, who have one thing in common: The belief that the “left” has “destroyed our states and nation.”

Republican Senate candidate Mark Kirk will not be attending the event, and his opponent Alexi Giannoulias is hoping the event will stir up support for Libertarian candidate Mike Labno. According to Lynn Sweet of the Chicago Sun-Times, the Giannoulias campaign has been attempting to get Labno’s name out there–hoping he will appeal to conservatives who find Mark Kirk too moderate.

“I want to thank Alexi,” Labno told Sweet, adding that he didn’t care if Giannoulias was using him to take votes from Kirk. “I’m sure that is part of it. … I appreciate him getting my name out and helping my campaign.”

Republican gubernatorial candidate Bill Brady saw early support among Tea Partiers in Illinois–but as his lead over Democratic Governor Pat Quinn grew, he distanced himself. He won’t be attending Right Nation on Saturday, either.

Also not in attendance Saturday? Journalists. From Gawker:

Tickets to the Sears Centre Arena start at $77 and go up to $1,200 for a meet-and-greet with Glenn Beck. The Chicago Tribune reports that people from all across the country will be in attendance.

“It’s a massive rally for victory in November,” Right Nation spokesman Collin Corbett told the Tribune. “It’s all designed to generate some excitement, unity and support for our candidates.”

Proceeds from the event will go to conservative campaigns, according to the Tribune, but Right Nation does not endorse any specific candidates, because it’s meant to appeal to a broad audience.