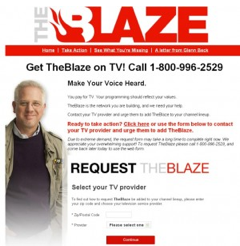 Former Fox News host Glenn Beck is planning to take on his former employer more directly than he ever has before. His media company, TheBlaze, which includes a news site and TV network, is making a push for traditional cable and satellite companies to start carrying the channel.

The campaign is called GetTheBlaze, and encourages Beck fans to call their pay TV provider to get them to add TheBlaze to their channel lineup.

DISH Network already carries TheBlaze, as we noted last year. In fact, DISH is throwing its hat in support of the company’s efforts, giving a quote to the New York Times supporting TheBlaze:

“TheBlaze and Glenn Beck bring a unique perspective to Dish’s broad spectrum of political programming on all sides.” When the channel was added last fall, he said, “We had customers sign up quickly, and we saw new customers join Dish. In fact, subscriptions attributable to TheBlaze outpaced our projections by 80 percent, proving that Dish is giving customers what they want with a choice in programming, not to mention the technology to choose how to watch it.”