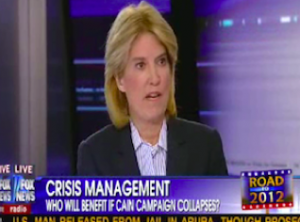 Has Greta Van Susteren been remiss in regard to a key disclosure?

As host of Fox News’ prime time show “On the Record,” Van Susteren has talked about Herman Cain’s presidential candidacy at length.

But she has failed to disclose the role of her husband, prominent Washington lawyer John Coale, as an advisor to the candidate.

ABC News reported Tuesday that Coale is “now informally advising” Cain as he faces allegations of a 13-year affair (not to mention the allegations of sexual harassment from four different women). ABC also reported that Coale is not getting paid, which removes one potential conflict, but he does seem quite involved.

Coale was on a conference call Tuesday morning in which Cain said he was reassessing his campaign. Coale was also the one who reportedly told the New York Post’s Cindy Adams that Sunday’s big media dinner for Cain would have to be cancelled.

Also Read: Herman Cain May Drop Out of Presidential Race After Affair Allegations

Barbara Walters, Matt Lauer, Bill O’Reilly, and, yes, Van Susteren, wereall supposed to be in attendance. Adams told New York One that Coale cancelled it after Ginger White claimed she and Cain carried on a consensual affair for 13 years.

And yet when Van Susteren, who already scored an interview with Cain’s wife, Gloria, discussed Cain both on Monday and Tuesday, she failed to mention any of this. On Monday, she spoke on her show with ABC News’ Rick Klein. On Tuesday, after the ABC report, she spoke with Fox’s own Brit Hume.

Van Susteren posted a note on her blog in response to the allegations, listing her husband’s friends in Washington and insisting that her husband “does NOT WORK for any of them and NEVER HAS.”

Fox News executive VP of programming Bill Shine has directed journalists to Van Susteren’s blog, claiming it is enough of a disclosure. Shine declined to explain why Van Susteren didn’t mention the relationship — however deep it is — on the air.

Fox has tried to avoid any appearance of bias with other candidates, taking both Rick Santorum and Next Gingrich off the air because of their campaigns.