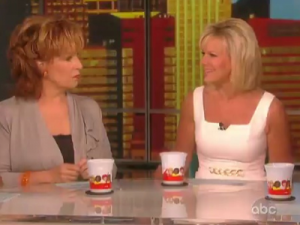 Elisabeth Hasselbeck was off this morning, so ABC called on another morning show anchor, Fox News Channel’s Gretchen Carlson, to fill in on “The View.”

The “View” co-hosts engaged in a little good-natured banter with the “Fox & Friends” co-anchor at the beginning of the show. Joy Behar told her she “looked Swedish” and Barbara Walters responded that she “looked like a wild woman.”

In response, Carlson revealed that her nickname at Fox News is “BA,” short for Bad Ass. “But in a good way,” she clarified. “I thought that stood for Bachelor of Arts!” Walters quipped.