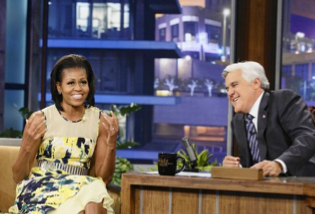 “Tonight Show” host Jay Leno is taking a significant reduction in pay and roughly two dozen staffers are being let go as part of a major budget restructuring at the late-night talk show.

Although”The Tonight Show”remains the top-rated late-night program, from a financial standpoint it is only break-even, according to a person familiar with the show’s economics. One reason is that its production budget was not reduced when Leno returned to late night after his ill-fated stint in prime time during the 2009-10 television season.
eno, whose current salary is between $25 million and $30 million, volunteered to take a cut if it would save some jobs. A person close to NBC thought Leno’s new salary to be around $20 million.

“Jay’s foremost concern is for the wonderful people who work for ‘The Tonight Show,'” Bruce Bobbins, one of Leno’s spokesmen, said in a statement. “He did what was necessary to ensure their well-being.”

Bobbins declined to elaborate on how much of a pay cut Leno took.

Between 20 and 25 people are said to have lost their jobs, and other senior staffers agreed to pay cuts. An NBC spokeswoman declined to comment.

The weekly budget for Leno’s prime-time show was approximately $2.3 million, and it stayed there when he returned to late night after Conan O’Brien was let go. The budget now will be closer to $1.7 million, which is in the range of what it was during Leno’s previous late-night stint.

Leno is not the first late-night host to agree to a salary reduction. In 2009, CBS restructured David Letterman’s salary and his show’s budget.

Whether NBC will look to other areas to make additional cuts is yet to be determined. Earlier this year, the network trimmed its marketing and promotions staff.