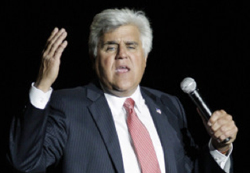 The host of “The Tonight Show” was in Alaska to perform a show Saturday at Joint Base Elmendorf-Richardson in Anchorage.

He also helped cut a ribbon for the opening of an Air Force Reserve recruiting office in Wasilla, the home of Palin, the former Alaska governor and GOP vice presidential nominee.

Leno thanked new recruits who were sworn in during the grand opening.